BRASH syndrome is defined as a combination of the following: 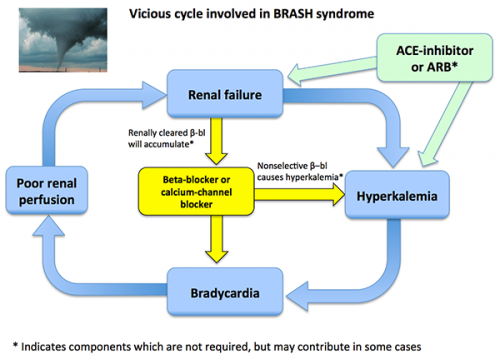 Diagnosis of BRASH is relatively simple, once one is aware of the syndrome.  In particular, BRASH should be considered in any patient who is presenting with bradycardia.  The components of the syndrome may easily be identified based on the patient's medication list, vital signs, and basic laboratory data.

Differential diagnosis: This centers around sorting out BRASH syndrome from simple hyperkalemia or from AV blocker intoxication.  In reality, these entities occupy a continuum which at times may be impossible to parse out.  Some key distinctions are as follows:

Here’s the #ECG of a patient who presented to the ER with BRASH syndrome:

Note how the bradycardia is out of proportion to the other classic changes of ↑K+ #FOAMed pic.twitter.com/tHq4nugMvu

evaluation of the underlying cause

any cause(s) of renal failure (more on this here)

any cause(s) of hyperkalemia (more on this here)

A thorough history and physical examination will usually disclose the cause of the BRASH syndrome (especially if POCUS is used to assess volume status).  For example, hypovolemia due to reduced fluid intake seems to be a relatively common cause.  In many cases, the trigger will be obvious – making further evaluation unnecessary.  If the cause is unclear, then additional evaluation may be needed (e.g., urinalysis, renal ultrasonography, and measurement of creatinine kinase).

Since BRASH is a vicious cycle, a concerted attack on all components of the cycle is generally very effective in reversing the syndrome.  As such, the key is simultaneously deploying simple, noninvasive therapies for each component.

A very common error is to focus on treating just one element (e.g., placement of a transvenous pacemaker to increase heart rate), while ignoring other components of the syndrome.  This is far less successful in reversing the overall condition.

most patients require no procedures

assess volume requirement based on POCUS and history

epinephrine or isoproterenol if hypotensive

More on the treatment of bradycardia here.

For treatment options, see the chapter on hyperkalemia here.

Additional interventions to reverse beta blocker and calcium channel effects are listed below.  These should generally not be required for BRASH syndrome management, but rather they are intended more for medication intoxication.  In unclear circumstances where the patient isn't responding to any other therapy, they might nonetheless be considered.

To keep this page small and fast, questions & discussion about this post can be found on another page here.

The Internet Book of Critical Care is an online textbook written by Josh Farkas (@PulmCrit), an associate professor of Pulmonary and Critical Care Medicine at the University of Vermont.